Saturday was a special day for me.

I managed to complete a CrossFit workout that included 6 x 800 meters running.

Why is this so special you ask? Well, amongst other health limitations I have asthma. It’s not a very strong kind of asthma but it’s there nevertheless and I feel it often enough when doing my CrossFit workouts. …and it can be heard as a sound that sounds like barking… 😉

So far I have avoided the running parts and used the rowing machine instead when the others went out on the run. My coach Dan had already told me off and said I should really start running instead of rowing and I told him I will.

So before I tell you how I did I give you a quick explanation of how my life with asthma has been so far. 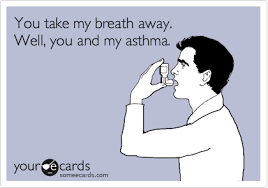 I have a lot of health issues and when I was a kid my dad often said I was just pretending to get attention. While this doesn’t hold true generally, asthma probably IS something that I developed to get attention. Not consciously though. Apparently many children start having illnesses like asthma when their little siblings are born. The lack of attention they get from their parents often results in developing obvious health problems to re-gain the attention they had before. My brother was born when I was 3.5 years old but I only developed asthma with 7 years. So I am not sure how much of my theory here holds true…fact is, it should have come with all my allergies from birth but seems to have developed later.

I needed an inhaler every morning when I woke up and several times during the day – mainly obviously when doing sports. This caused children in school to bully me. They imitated my coughing and breathlessness and never failed to laugh at me when I had to sit down during sport classes and use the inhaler. In sports I was only good in throwing stuff or anything else strength-related (my results were so good that I was already in the boys’ scoring). Although I couldn’t do any running, teachers started marking me “as if I hadn’t got asthma”. So suddenly I go a “1” (an “A”) in sports which resulted in even more bullying from the boys.

Over the years the asthma got weaker and the inhaler was with me just to feel safe and usually for one use in the morning after waking up. I also started smoking (never much though…like a pack per month) when I had a boyfriend that influenced me badly here. Still today I like to have a smoke when I go out…but never when I am at home or in the office…
Anyway, when I moved to England in 2005 and ran out of my inhaler I needed to go to the NHS to get a new one. They didn’t have the brand that I used for almost 20 years and I felt the new one didn’t work at all. I realized that most of this really must be psychological. At the same time I started doing yoga on a daily basis and suddenly my whole breathing changed. After only a couple of months I celebrated throwing away my inhaler knowing I could live without it.

Since then I have the power to listen to my body and only slowly to increase the strain I put on my lungs. I forbid myself to ever get another inhaler and rather want to control and strengthen my lungs during workout. That means I usually go Power Walking or rowing instead of running for example. I know that when I improve my general fitness even more that I will be able to run in the near future. I just need to keep at it and also get my head straight when I do it.

And this is exactly what happened on Saturday. I had asked to give me more time so that the mental pressure isn’t affecting my performance. My coaches said there was a 45 minute cap on anyway but I requested not to have one at all. I simply concentrated on getting it done, not minding how long it might take.

The dead lifts weren’t a problem at all. As always my strength was helpful in saving time here. But the “running” was more jogging with occasional power walking.

I tried to keep a steady pace and concentrated on breathing in the same kind of rhythm. It worked. The asthma didn’t kick in at all during the whole workout. So for the last 200 meters I decided to speed it up to an actual run. I thought if the asthma kicks in in the end it doesn’t really matter as I can rest and take care of it then through breathing exercises. So I started running and my coach Ian met me at my last 100m and ran together with me back to the gym. He told me that I still had 3 minutes in the 45 minute time frame. I was thrilled. Back in the gym I grabbed the barbell and smashed my last 15 dead lift before lying down on the floor. I got high-fived and felt real good about myself. I finished the workout in the time limit with 43 minutes!

The interesting thing is that I think if they had given me the time cap I would have probably panicked at some point and wouldn’t have been able to do it that fast. It’s all a mental game that I will need to learn to control!

The whole week at CrossFit had been awesome as I smashed all my records and could see progress wherever I looked. But I will write a more detailed blog about my first 3 months at CrossFit at the end of this week.

Thanks to my CrossFit coaches! Not just Erin and Dan who run CrossFit IOM and were away this weekend, but also Ian and Mark who gave me a lot of support on Saturday!

I know it sounds weird…but I am still fighting with my childhood bullying issues…I expect people not to believe me or say I am pretending…it is so very different here at CrossFit with this awesome group of people. They understand how much extra work and effort I have to put in to get close to the results of others. Not just because of the asthma but also my other health problems…(I will write about those at some point as well.)

Another achievement last week was that I actually won the trophy for Best Female again in our company bowling night. So I could defend my title!

What a great week this was!